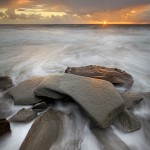 When I began taking photographs, there was no instant feedback from an LCD screen or histogram to tell me if I’d chosen wisely with my exposure settings. It was a matter of  relying on the camera’s light meter (or an external light meter) and then crossing my fingers until the film was processed and I could view the printed result. Most of the time things turned out okay, but if I’d misjudged the situation, as is easy to do in tricky lighting conditions, there was no going back – a badly overexposed or underexposed image went straight into the bin. One of the safeguards against this was to bracket exposures. This simply meant taking several shots of a scene using different exposure settings in the hope that at least one of them would give a good result. This could be done manually or, with later film cameras, the camera could… | Read the full article

Brilliantly coloured photographs often leave viewers feeling like the scene appears too good to be true. More often than not (especially in this age of digital photography), these photos actually are ‘too good.’ In other words, digital images are often altered in order to draw out the most dramatic elements (colour, lighting, shadows, etc.), and the most common way of editing photographs in this manner falls under the category of High Dynamic Range (HDR) photo editing. HDR techniques have been in existence prior to the boom of the digital photography industry, but the almost overwhelming use of this technique really bloomed once easy editing software became more accessible to the general public. HDR photography, if used properly, can help artists create fairly accurate representations of scenes that cameras’ light sensors are typically unable to fully capture. For example, often certain areas of a photograph are either too light or too… | Read the full article